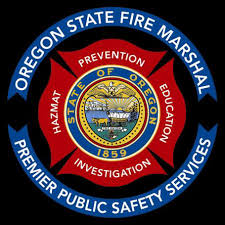 The Oregon Office of State Fire Marshal (OSFM) – who, among other responsibilities, coordinates emergency response planning for oil or hazardous materials spills or releases during rail transport – recently worked with Morrow, Polk, and Umatilla counties to complete the plans. Input is gathered from stakeholder groups including first responders, emergency planners, tribal representatives, railroad operators, healthcare administrators, and many more to ensure a “whole community” approach to planning and response.

The overall goal of these local plans is to develop the framework for a safe, effective, and efficient response to a hazmat by rail emergency that might occur within their jurisdiction. Plans include information such as the frequency of hazardous commodities transported, emergency notification and response procedures, evacuation routes, probable areas and population impacted along the rail lines, and historically, culturally, and environmentally sensitive areas.

With roughly 40% of all hazardous materials transported in the United States shipped by rail, Oregon State Fire Marshal Jim Walker applauds communities for taking preventative action locally. “By planning notification and response procedures upfront, communities like these get ahead of the curve by preparing for an incident of this magnitude and favorably influence the outcome for both responders and the citizens they protect.”